Don't feed the sharks if you want to go swimming later. Once stimulated by blood they tend to lay in wait for the second course! 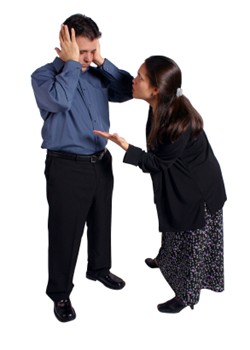 The temptation may be great but to intentionally irritate another person while fighting, while satisfying, is usually counter-productive. The goal is to find a path upon which agreements can be forged. That is difficult enough when the parties to any dispute are essentially antagonists. Provoking one another is like throwing hand grenades in your way.
As long as discussions are progressing, maintaining that momentum by facilitating the interaction is worth the discipline of not throwing barbs for the fun of it; especially if there is a personal relationship at stake. The objective is to resolve the problem not destroy a friendship.

That said, being an antagonist can be effective. There will be many times when a negotiation becomes stalemated; the parties are about to give up on reaching a resolution. A good negotiator knows that this is the time to shift negotiating styles. Often this means changing the approach from that of a polite mediator to that of an antagonist can evoke a reaction; any reaction. Such reactions can create some form of movement in the discussions that get the parties involved again.

If you are embroiled in a group negotiation and one of the parties is causing the stalemate you might elect to take the person aside and tell them that they are wasting everyone's time by being a jerk. A healthy tongue lashing in private may serve as a reality check for the obstinate party and break the loggerhead. A public tongue lashing may well create a war between loyal forces and escalate the school yard argument to a turf war after school lets out.

Similarly, in a business negotiation, if you assess that the initial offer from the other side is ridiculous and you do not need to make the deal, you may consider invoking the role of the hardened business person (antagonist) to save everyone's time by rejecting the offer and suggesting the meeting end. If you are willing to walk away, being abrupt will either save time by ending the discussions or cause the other side to quickly improve their offer. Either way, the antagonist strategy has used the power of indifference to change the outcome of the meeting.

Remember, antagonistic tactics can backfire. Egos are fragile and anger can rage uncontrollably when a person is provoked. Use an antagonistic style or tactic only if you are prepared to walk away from the meeting if things fall apart and, this is important, you don't care about the relationship.