Elephants, gorillas and lions all strut though the jungle exuding the image of being all powerful. Your trusty elephant gun will prove otherwise!

Bullies are not found only on the playground. As grown-ups, bullying is often a characteristic of those who have accumulated power or are in positions of power. The second category of bully, those in positions of power, is often the source of the most abusive bullies. They, rather than earning their own power, have been given powers over others by their superiors, sponsors or supporters and they learn quickly to like the image their office places on them. Then they begin to misuse or over use it to their advantage.

In the corporate environment large developers typically train their real estate people to negotiate from a "my way or the highway" position. This aggressive posturing tactic is simply a bullying tactic. The tenant representative, trying to meeting his or growth plan and earn a bonus or keep a job, is easily intimidated by such tactics. The landlords do control good real estate and they know it. So the tactic works and because it does, these aggressive landlords continue to use it.

Bullies with power are able to make the rules of the game. But when they lose their power then they can expect retribution.

The best way to counter this developer bullying tactic is to generate options; alternative sites that you can acquire instead of the site in question. That is the parrying tactic. A tenant representative can create these options by:

All of these arguments deflect the developer's bullying tactic and allow you to shift the focus on why the developer should prefer your use and company to other contenders. Depending on demand and how desperate other users are for the real estate your deflective tactics may serve to level the playing field.

Conversely, if you are the developer and happen to have the power to dictate terms, do so in a fashion that does not appear to be bullying. Yes, you may be entitled to demand top dollar for the site but just because you are in control of this market does not mean you will have the same leverage in others and the prospects you are dealing with today you may need next year. The goal of a negotiated settlement is to have everyone leave the table with some self-esteem. In business, people change positions and companies a lot. You never know if the person you abused last week will be sitting across the table from you when the power equation is reversed. 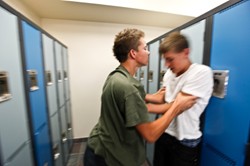 The best way to handle bullies at work, at home or at play is to gather whatever power you have and stand up to the person. Even if you fail to prevail you will earn some respect in the process. There are times when you will win and times you will lose. If this is a time for a loss, seek to reap some benefit from the negotiation. This benefit may be in the form of gaining respect, developing a healthier relationship or simply garnering intelligence to use in the future with the bully.

If the bullying is recurring in a personal or family relationship, you have the problem of not being able to get away to let things cool down or avoid future incidents. You need to consider your options. Determine if it is a real, physical threat in which case you need to get safely away and try to work things out after you are safe. Assess if the behavior can realistically be modified. Sometimes mediation and negotiation can't change a situation and different professionals are needed. Sometimes there simply is no solution but separation.