The objective of negotiating is to inspire another person to do something they may not want to do. Some of the tactics of negotiation include persuasion techniques. Persuading others is the art of the process. A little friendly persuasion by Guido, the godfather's henchman, is one way of being persuasive. Encouraging the parties to talk and work things out using persuasion techniques is another. It is all in the approach.

Persuasion is often used just to get reluctant participants to talk; to get reluctant adversaries to open up, consider options and discuss the situation. This dialogue is an essential step forward in any negotiation.

There are many ways to be persuasive. To improve your negotiation technique, learn to use these 10 persuasion techniques, or recognize when they are being used on you.

In most negotiations we assume that the prime motivators are avarice and greed. While almost always present, these motivators are not always the most persuasive techniques available to a negotiator. It is the ability to use more subtle tactics that marks the difference between negotiators. 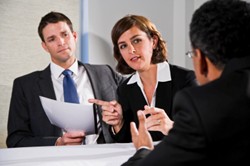 1. Positive Reinforcement
The desire to be liked is very strong in all of us. An effective persuasion technique is the use of classical reinforcement conditioning.

The Pavlovian cause and effect relationship model relies on the consistent response, positive or negative, to condition the other person to react in a specific way. In any negotiation there are ample small issues that need to be resolved before the main task is even addressed. Deciding when and where to meet is the start of a relationship. Reinforcing the other person's working with you on these little issues with a sincere smile, handshake or appreciative gesture you are subliminally reinforcing their performance with your approval. Most people enjoy being liked by others and will, properly reinforced, continue to try to get more of your approval.

Don't fall into the I-want-to-be-liked trap yourself. In general most people genuinely want, even need to be liked. But in a negotiation you need to have the personal self-esteem and confidence to understand what is being asked and reject pressure to do what you know is not in your best interest. By standing up for yourself you will gain the respect of those around you.

2. Respect
A negotiator can motivate another to help by outwardly deferring to the other's expertise, experience and power. Playing to another's ego can be an effective persuasion technique to invoke the other person's ego to help you make the deal. When the strategy works, the other person begins to act like a coach or mentor and in doing so reveals the terms upon which a deal can be struck. Once that is established then you are in a position to either tweak or accept the terms; or decide that a deal just can't be made. In any event you have achieved your goal of learning the other person's parameters.

3. Avarice and Greed
Avarice and greed is a positive motivator in that it clarifies the situation. If you know the other person is driven predominantly by money or wealth accumulation then you know he or she will be willing to agree if the price is right. Your challenge is to mitigate your cost. This is typically best done by introducing other, less costly motivators into the discussions.

4. Recognition
Who does not want to be recognized by their peers? Often in a public or important corporate negotiation one side will offer the other the opportunity to claim the responsibility for reaching an agreement in exchange for a major concession. This persuasion technique, either psychological or professional, can be very powerful.

5. Success
Everyone wants to succeed. Sometimes winning becomes more important than the commodity in question. A traditional persuasion technique is to feign submission while garnering the final concessions. You might expect to hear a phrase like, 'You really beat me down but I have to have it, can you just agree to "X"?'. This submissive approach telegraphs to the other person that they have won....if they will only make one "little" adjustment to their terms.

This is a great closing technique when the parties are close but not quite there. The willingness to leave a little of your ego on the table in exchange for tangible rewards can pay dividends.

6. Avarice and Greed
Threatening to deprive someone of a deal or the proceeds from a deal can be a powerful persuasion technique or tactic. Individuals forced into a negotiation because of cash flow problems such as a mortgage they can no longer service are vulnerable.

Being fixated on the monetary aspect is a weakness that can be used by anyone with available cash or credit. In down markets smart money comes into play. This is unfortunate for some but beneficial to others. Cash, in this situation, is very persuasive.

7. Failure
No one likes to lose. In America we are taught from a young age to try to come in first, get "A"s, or be the first picked. Our mother's and father's beam when we do well. By the time we are adults failing has become ingrained as a major psychological punishment. When you enter a negotiation you must set aside your fear of losing in order to negotiate with a clear mind.

Avoid the compulsion to always win. You can't and won't win every negotiation. Losing isn't failure to a negotiator; paying or sacrificing too much is.

8. Fear
People can be motivated by many things. The basic motivator is fear. A robber with a gun pointed at you need only ask once for your wallet. The bank threatening foreclosure can also bring havoc to your life and alter your negotiating position.

The best way to thwart fear being used as a persuasion technique against you is to develop options. Threats are only compelling when you have run out of options.

Monitor the non-verbal signals you are sending to make sure they are not getting in the way of your objective. Anger, frustration and petulance is no way to encourage another person to do something they are reluctant to do.

10. Obfuscation
Persuasion techniques include tactics to mislead us by intentionally sharing part of the truth. A broker or landlord may mention that he heard that your competitor has been looking at a site across the street when in fact they looked at the site but have passed on it. What was said was technically true but misleading by intent.

By withholding part of the truth or adding unrelated information into the conversation the other person is seeking to manage your opinion of the subject knowing that the whole truth would be counter-productive.

Persuasion, sometimes considered manipulation, is not evil. Those who misuse or abuse it are. Whether we are dealing with a spouse, child, boss, employee, peer, ally, school mate, date, teacher, banker or car salesman, we are simply trying to reach an accord. Aggressive persuasive techniques such as bullying can be persuasive but are often caustic to a relationship.

Related Content
Six Basic Negotiating Tips
What is Negotiating?
The Art of Persuasion
When to Accept an Offer
What to Avoid When Negotiating