Negotiating is the process by which two or more people get along in a social, competitive environment. Competitive in that two people typically have differing wants and needs and must figure out how to work together to get along. Negotiating is an integral part to any relationship. It may be personal, social, professional or simply a chance meeting on the street.

Unlike bartering, arbitrating or mediation negotiation is the collective process that impacts us in every aspect of our lives. It is not limited to the business or legal aspects of our lives. Negotiation is the base process of people interacting with one another. Bartering, arbitrating and mediation are civilized attempts to refine the negotiating process into a disciplined process.

To answer the question what is negotiating we need to understand better what it is get along with our fellow negotiators; other human beings that happen to cross our paths for one reason or another. 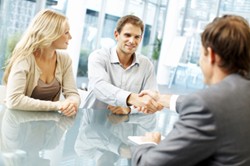 It is very human to want something someone else has. How we get it, or attempt to do so, is how we implement our style of negotiating. We can be subtle, caring about the other person's interest, wants and needs, or we can be self-centered, focused solely on our needs and abusive in the process.

What is negotiating? When two people meet and begin to get to know each other, they start establishing how they will negotiate in the future. In essence, they are establishing how they will negotiate important things by laying down simply rules of etiquette. They learn each other's mannerisms, inflections, how they speak, what they are like. All these personal characteristics begin to build a mental profile that will help them understand each other in future conversations. Negotiating is built on the premise that two people can communicate effectively to work out a disagreement or problem. To communicate effectively we need to understand the nuances of nonverbal communications. Learn to Communicate

What is negotiating? Negotiating is the exchange of unlike currencies in a fashion that motivates both parties to honor the agreement. In this case currency can include tangible and intangible commodities. The age old exchange is sex for money. In the 21st Century it could easily be sex for power (or association with power). The currency of a negotiation may be wealth, recognition, sex, a diaper change or simply peace from a crying child or whining peer. We are trying to improve or avoid some aspect of our lives. It is a composite of needs or wants that drive any negotiation. Especially when someone else has what we want! The Currency of Negotiations

What is negotiating? The goal of negotiating is to improve your position as the result of the process. It is not simply getting to 'yes', 'no' or any solution. The solution is the product of an effective negotiation; not the goal. Being Right Isn;t Winning

The basic answer to what is negotiating is that it is effective communications between two or more people that result in all involved feeling that they have improved their situation to the extent that they will honor the agreement in the future. This does not mean that both have to win or feel like winners. It can also mean that the person who fell short of attaining his wants at least satisfied his base needs from the interaction. Sometimes losing less is better than losing everything.